After the exhibition is before the exhibition and I can already tell, that I will participate at the 1st SteinCHenwelt in June  2018, so I have to think of a few new ideas to built for the show.

Currently, I have the following stuff in mind:

The Eagle Transporter was inspired by the following MOC (link will follow) which I found an interesting combination and a possible solution for the transporter problem (= How do all the vehicles etc move from one planet to the next).

The Eagle was design to carry different payloads in its middle section making it a Muti-utility vehicle which can be adopted to different needs and also can adapt to new requirements or mission needs.

The Eagle has been designed with the “payload” now  being a crane, but with options to carry other payloads, e.g. a personal transporter, another lab (which I don’t like as there already exists plenty of lab transporters), a small space craft carrier …

As a next step, 3 Eagles will be built, the parts list are already uploaded to Bricklink.

In order to complement the collection, I’m currently working on a few projects in different stages of completion.

Main ideas is to complement the different bases with a place where the astronauts could actually sleep! Based on the blue/gray/yellow theme, it consists of 3 sleeping stations and an installation for air/water supply and associated control: 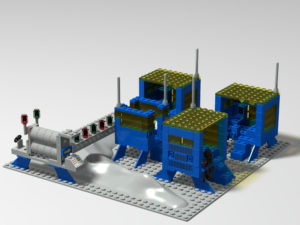 The idea is that a main exploration base would contain several of those sets to provide adequate sleeping quarters for the astronauts.  It can be expected that 2 persons share a cabin, one person resting while the other is on duty or on an away mission.

The set has been designed in Bricksmith and all parts have been uploaded to Bricklink. I have finished this set and it is now assembled. I must admit, it is not too bad but also not super exciting. It fits the style and in combination with certain sets it looks quite well. Photo and the resp. LDraw file will follow shortly as well.

Set 1526 was never released however it seems that a resp. box was found in Lego HQ (See story here). 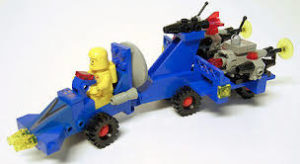 So of course, as a true collector, this set must be part of the collection. As the set only contained “standard” parts it is no problem to get the pieces and built it. Thanks to other Lego fans, getting an LDraw Model and a resp. parts list is no issues, so I had hardly to do anything.

I finished procuring all parts and have now assembled the set and integrated it into my collection. 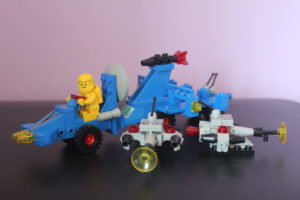 An easy project was to design a Galaxy Commander in vintage colors, meaning in the blue / grey / yellow style of the first classic space ships (such as Galaxy Explorer). All it took, was to download the LDraw file for the Galaxy Explorer, load it into Bricksmith and starting changing colors. Given that this is a vintage series, I decided to skip the rear section with the lab Assembly. Therefore it could be said, that this is the first prototype of a Galaxy Commander type ship and was later extended to its final design. Anyway I think it looks cool: 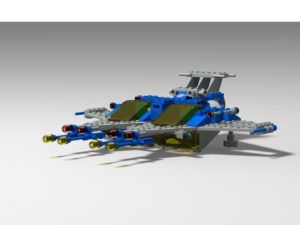 I uploaded the parts list to Bricklink and, after a few weeks waiting time, and to finish also the project 1526, I added the list to the parts being procured (This helps to avoid buying one last ,missing piece and having to pay 10€ shipment for a 5 Cent part ..). After having received all parts needed, I had to make one small change (I think I ordered the wrong parts), meaning the front antennas of the unit are now all grey. But otherwise the assembly worked perfect and the set was finished rather quick. So now it is part of my fleet!

For everyone interested, here are two links to resources in case you are interested to built it yourself: 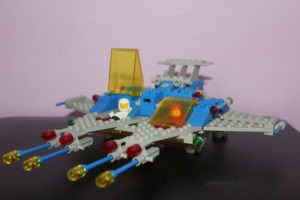 One spaceship type I always found missing when defining some mission scenarios with the Classic Space sets was a transport spaceship. How do you get all the stuff and vehicles to different planets, moons etc …I tried a few design approach towards a larger transporter and couldn’t come up with a design a truly liked. Either too bulky, too strange looking, too boring looking etc. So my current favourite is a transported based on the larger Cosmic Fleet Voyager. However I took out some walls / doors and gave it a different color style to make it look different: 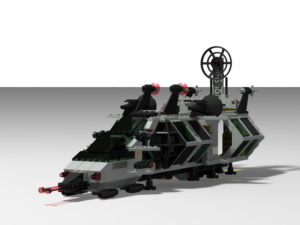 I uploaded the parts list to Bricklink and, after a few weeks waiting time, and to finish also the project 1526, I added the list to the parts being procured. For the same reasons as above, it helps in reducing shipping cost or having large quantities shipped (price is the same for 1 or 50 pcs) for the same price, if you look for more pieces in the Bricklink shops.

Anyway, after I received all parts, I first had to set-up the BrickSmith file so that I could assemble the unit. This means, to make a proper step-by-step view to know which part would go there. And, as expected with such a large unit, I had to make a few modifications along the way. For example, I had an additional ramp inside the transport, but it didn’t work out. I couldn’t lay it flat. I also had to add some additional parts for re-enforcement to make the set more stable etc. But in the end, it looks quite good and can serve as the main transporter for my space base!

So now it is part of my fleet!

For everyone interested, here are two links to resources in case you are interested to built it yourself: 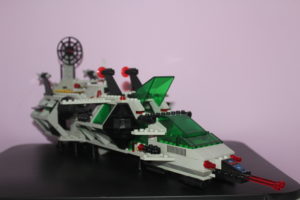 Update December 2017: The transporter has been dis-assembled the parts will be used for the Eagle. In the end I didn’t like the designs too much and wanted to use it for something else.

While all main bases of the Classic Space Sets provide communication means, I figured a dedicated communication base is also still missing in the line-up. So I started design the coms base, which should feature:

So far I have this design, but not too happy with it:

The two empty platforms should host the Phase Array and the Optical Coms section but most likely the Phase Array has to go away to to host all optical comms stations. The communication base is still not finished and I currently lack motivation and ideas to move forward. I will let it sit for awhile and see, if I gain a few more design ideas along the way.

Update December 2017: Nothing new, no progress. But some new approaches are lurking in the background as I found some interesting MOCs that I can use as an inspiration for a new communication base. These will look very different but I better reflect what I have in mind.