After a having bought a few used sets I started to discover a very new aspects of collecting Lego sets: BUILD YOUR OWN. And built your own using a computer, some software and in the end bricklink to order the parts and make a real set.

I more or less stumbled across this approach by browsing the Lego Website (look for spare parts), where they have have the Lego Digital Designer Software (LDD) to build Lego sets on the computer.

I worked for a while with LDD until I noticed some limits, e.g. I couldn’t get typical LEOG Classic Space parts, such as the crater baseplate or the bricks with the logos on it. So further googling and browsing revealed some open source tools to design your own sets. In the end, I settled with a tool called Bricksmith. Other alternatives are e.g. Stud.io from the Bricklink . However, in order to get Bricksmith to work, some additional tools and a LDraw parts library have to be installed.

After having switched to Bricksmith and now finally having all parts in place, I started to seriously working on a set.  When looking at the various Classic Space Sets, I noticed a major missing element, a true Science Center for the explorers.

Overall guidelines for the science center was as follows:

I started the science center with LDD, and get a first version looking something like this.

After further thinking and re-looking at existing bases from Classic Space, it became, clear, that e.g. one wall is not built to have access and the roofs are actually not opening. So some re-design efforts started however I felt the limitations with LDD, e.g. the crater plate was not available and therefore the true size of the crater hills and if normal stance would work or not, was not clear. So this triggered the story above and I finally started working with Bricksmith and the full parts collection to build a Science Center. Re-starting with Bricksmith also triggered some re-think on the design:

So after several version, iterations, thoughts ideas, back and forth, a version with open walls etc was considered final (sorry, don’t have that version anymore). Now the next questions was, how to order the parts from Bricklink. So after several trial and errors, I found a way to move my parts list from Bricksmith to a brick buying website. At that time, Bricklink did not allow to upload draw files, so I have to use a different site to get the item procured, which was Brickowl at that time. Uploading the design into Brickowl revealed a few problems with Bricksmith, if you you are not careful. Basically, Bricksmith let’s put you any part in any color configuration into the design. So if you need a 32×32 baseplate in trans blue, you can do it. However, such a piece does not exist … So my first design contained a few pieces, that did not exist, e.g. a dark blue translucent 6×12 plate (used for the roof). So another iteration was needed to use only parts, that can actually be bought. Well, after all I could upload the design, assign all parts and was finally in the position to order what I needed: 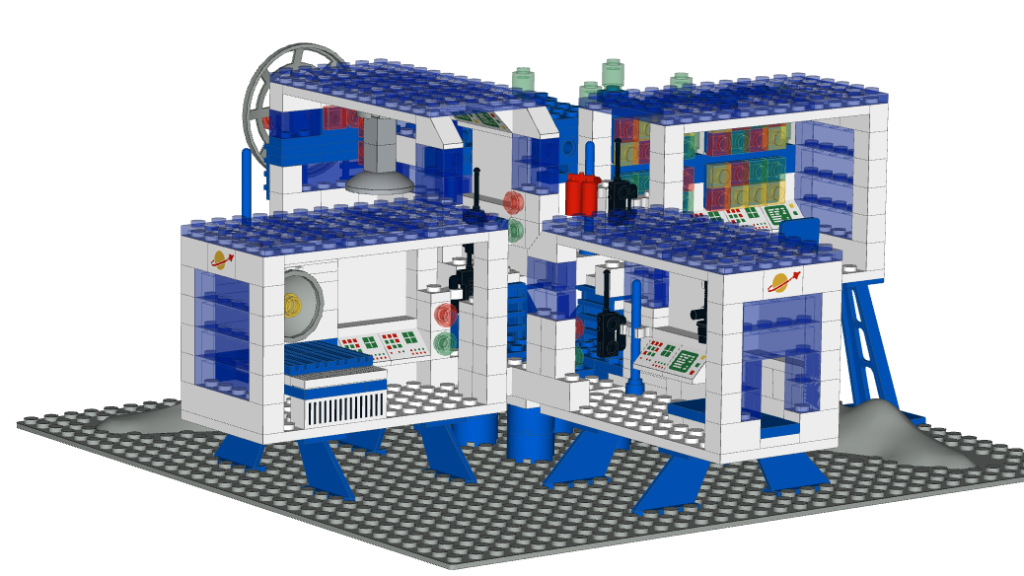 As no store has all the parts needed, I had to order from several stores and it took a few weeks before I had all parts needed to start building.

Well, during building the Science Center the first time, a few things I realised and didn’t like:

So I updated the design while moving forward and in the end, this is the final version as designed and built:

And here you find a photo of the set in reality: Science Center

In addition and using the tool Lpub also an Assembly Instruction was created in the end, in case someone is interested in re-building the set. But for the time being the set is truly unique.

I have built two smaller sets, additional Assemblies for the Galaxy Commander, so the space ship cannot only transport a lab, but also a small habitat and a storage facility for setting up a research outpost.