So, the Science Convoy was derided from the a MOC design by Andrew Daemon I found via Pinterest. I liked the idea and approach, so I started working on it. My starting point was the LDraw model of the All Terrain Vehicle (Set 6927) I started adjusting the color code into the grey / green design as in Andrew’s design. However after looking and re-think, where the Convoy would fit into the narrative of classic space, I was convinced, that the color scheme of the All Terrain Vehicle (ATV) is the correct one. The ATV is part of the Science community of Alpha-Base and as the Convoy also is in my mind more related to Science as to other teams. My concept of the Crawler, and as I also picked it up from the MOC, was a truck, allowing to transport and set-up a small independent base with a power generator, communication base and small lab. So for me it fits more into the same type of equipment as the ATV and thus it should have the same color code. After all, the color code define where a system belongs to (up to a certain degree). And in my world, grey, green glass design is related to the Terraforming Team and this was not the Convoy’s purpose.

So I re-changed to color code back to the ATV code, dark blue glasses, white vehicle blocks with black elements such as thrusters etc. The cargo had to be in the blue / trans yellow design with radar dishes etc being in grey.

After the color code was settled, I started to work more concrete on the designs of the different trailer elements:

The tractor followed the design of Andrew quite closely with the additional wings and moving the engines on those wings. Also the cargo was very close to Andrew’s design, only the color code was adjusted. But I skipped the closed cockpit to maintain more the look of the ATV, as the Science Convey would belong to this department. And as such, design elements from the ATV shall be carried over to the Science Convey.

The mid section is already deviating quite a lot from the original idea. In a first version the mid section (and also the lab trailer) had more a cockpit design with also the lower glass section in the front. But this was a bit over the top, so I changed back to a more “trailer” like design, meaning no dedicated cockpit. But I kept the idea of the storage containers and the general small engine design, the side wall look etc.

The cargo, the communication lab kept the idea but was more design as the ATV lab, meaning a roof opening on the side which also required to move the antennas to the front for opening. Additional side dishes provide more science / comms opportunities and the trailer also has additional dish to acquire science data while roving.

The final lab trailer again is a mix of concept from the original crawler (small engines on the side, large at the end) and the some adaptations (the final side sensors) and the look of the trailer front section.

The lab cargo went a similar route. I liked the idea from the original design to have the lab split into an “outdoor” section and the closed lab with the doors open, this general concept I kept. But the outdoor section in the end become a very small rocket launch pad and lots of sounding dish, transmitters, receivers etc.

As usual, it took a few iterations on details before settling on the final design, ready to be ordered from Bricklink: 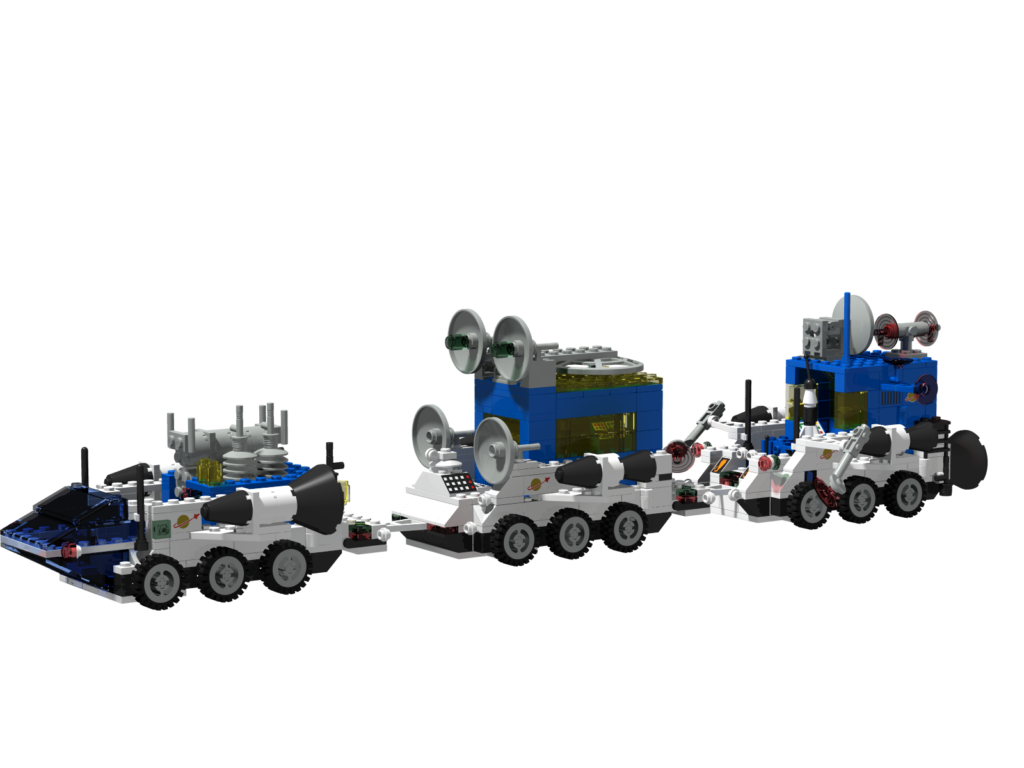