So after I had finally all parts together, I started building the Eagle and the resp. payload modules. Overall the digital design worked quite well and almost everything worked as planned, but …

First problem, which appeared was how to actually put the payload modules into the mid section. Remember it basically had to slide from bottom to top. The fixation with the technic brick holes and the pins on one side and the axle on the other didn’t work at all. It was almost impossible to get the payload section and if it worked on one side, I couldn’t really fix the axle on the other side. So a concept had to be derived. I tried a few time on the live models w/o a clear idea. In the end it was clear, it would only work if I can slide the payload sections from the bottom in and fix them afterwards from the side. Anything else would fail or be too complicated or a one time built … I still wanted a certain amount of playability. So I started experiment with different attachment approaches until I settled for a solution of four 2×1 Technic Brick at the Eagle Grid (two on the front, two on the back) and the same for each payload section. Both, the bricks on the Eagle Grid and the ones on the payload module had to be aligned, so when the module was completely inside the payload bay, the holes align and I could put an axle with and “end-stop” to fix it: 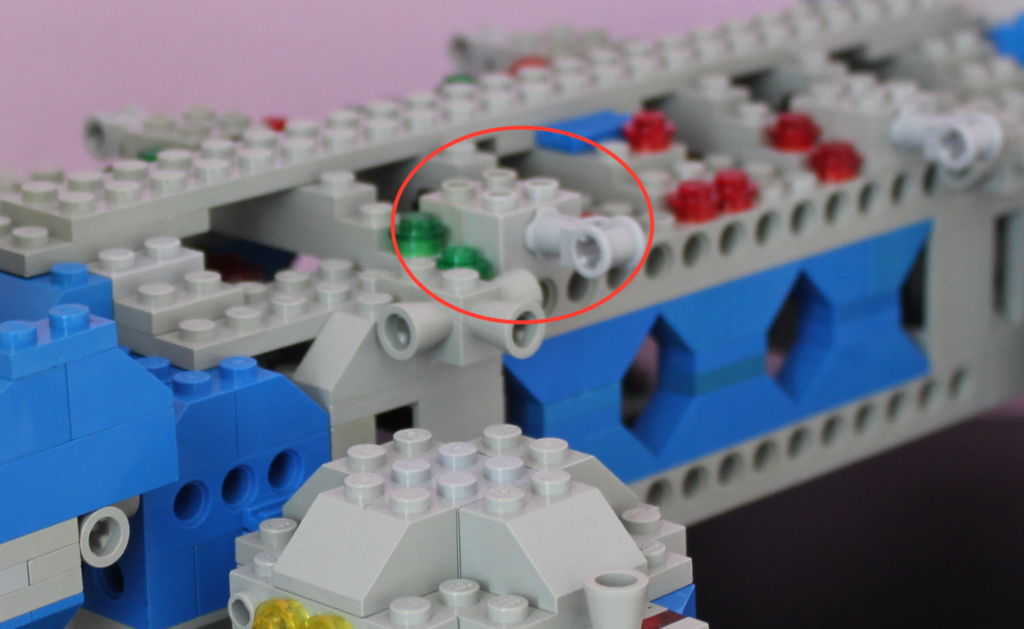 Once I had it resolved for the Crane, I also had to address the other two payload modules. But first I had to resolve another problem. But I have to admit the solution works very well and is very stable. Very Happy about it!

The second problem that became evident once I put it all together was the fact, that the People Carrier was too low in height … If I would sit an Astronaut with his helmet on into a sit, the roof would not really close. Also taking of the helmet does not resolve the problem. So I had to find a way to increase height inside the People Carrier unit without breaking too much the look and feel. Also, as I had to abandon the idea of the side pins, I also completely redesign the small side walls of the People Carrier. And the roof was too flaky to open and close  so I had to re-inforce it. So the People Carrier looked quite different in the end, as I also had to include the upper attachment point:

As you can see, I lowered the floor a bit, thus increase the overall height and added the side bricks for the attachment to the Eagle. So now the People Carrier was really working nicely and could do what it was designed to do.

The Cryo-Lab was actually the least problematic of all, it worked quite well, I had to adjust a few bricks here and there to make it more stable, no fundamental changes. Of course I had to add the attachment points, but this was simple to do.

Here you can find images of the Eagle and the different payload modules in their final assembly.